Cat Reman: Pulling Out All the Stops 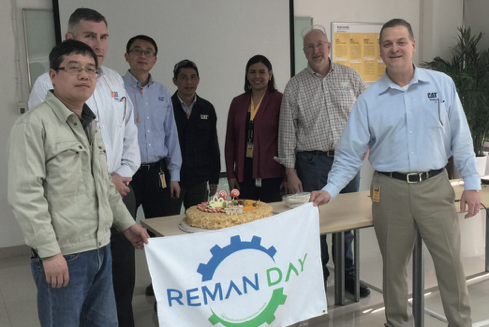 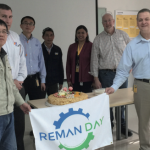 Cat Reman, the world’s largest remanufacturer, pulled out all the stops on the inaugural Reman Day.

Company representatives had advance dialogs with politicians andofficials, leading to Reman Day proclamations issued by four US states and introduced in the House of Representatives in Washington DC. Senator Roger Wicker of Mississippi sent a Reman Day video message which was broadcast at all employee Cat Reman meetings.

Most of the Cat Reman leadership team celebrated the day at the company’s remanufacturing pilot facility in Shanghai, China, where a Reman Day banner wentup, and the government officials pro-claimed April 12 as Reman Day for the local Ling Gang district.

Pictures from the Shanghai celebration were transmitted and featured later in the day when cakes in a number of US Cat Reman facilities were cut in honor of company facility anniversaries and Cat Reman’s 45th general anniversary, which were all celebrated on Reman Day.

“We had neat things going on on the company intranet, where we talked about the history of Cat Reman. We had Cat Reman quizzes and prizes, and everybody had cake,” explained John Disharoon, Caterpillar Director of Market Access for Reman, and Chairman, Remanufactur­ing Industries Council, RIC.

The events were mostly targeting the internal audi­ ence. Cat Reman has long been part of the Caterpillar DNA.

“We have been doing it for so long and executed our business model so well that we are verywell regarded as a profitable business unitwithin Caterpillar,” explained Disharoon. “We are the poster child for sustainability and get high marks for our safety record. Our employees have won the chairman’s award for innovation, safety and process.Everybody in Caterpillar’s executive officeis very familiar with our business.”

Great numbers of those in the huge Caterpillar organization with no direct exposure to remanufacturing read about it on the company intranet. They woke up with a message on their intranet home­ page, welcoming them to Reman Day and a special message from Cat Reman Vice President Tana Utley.

“On Reman Day, we celebrated the fine efforts of Cat Reman,” said Disharoon. “As the leader in the industry, we tried to do it right, and this time I thought we did it absolutely right.”