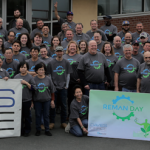 At office furniture remanufacturer, Davies Office in Albany, New York, 160 employees and co­-owners, wearing Reman Day t­-shirts, delved deeply into the benefits of remanufacturing in­-house and in general. And a college class of future potential customers – specifiers, whose future jobs may be to spec­ify the composition of office suites – from the interior design school at nearby Russell Sage College went through a comprehensive introduction to reman.

The program included company tours, luncheons and informational sessions. As the former RIC chairman, under whose tenure the Reman Day concept was developed, Davies Office CEO Bill Davies adheres closely to the RIC mantra of advocating, collaborating and educating (ACE) as a means to advance the reman cause and future business, as well.

As full as this years’ program was, next years’ will be even more ambitious, Davies promised. More stu­dents, more people in general, including end users, more tours, and even more awareness building.